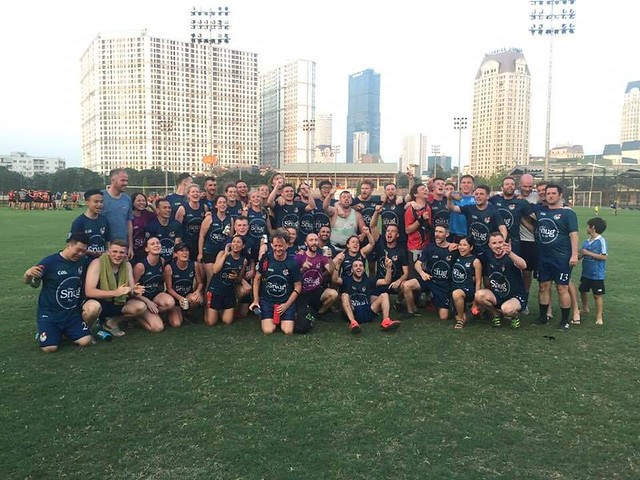 The Viet Celts began as a tiny off shoot of an expat football team in 2007 with a mission to corral as many unsuspecting people into the beauty of the game. That they participated in the AGGs that year in Singapore was largely down to the work of Colm Ross who remains a figurehead within the club. The infamous Hanoi guru, Jim Kiernan, took over the torch for many years as the club expanded to host the SAGGs in 2008, 2014 and 2019 and move to mixed training sessions with the ladies team making their bow in 2008. Both mens and ladies teams have enjoyed periods of success over the years with the most recent silverware including the Ladies Plate in Singapore 2018 and the Mens Cup in Hanoi in 2019.

We have been involved with youth football as well, most notably with a local charity for street kids called Blue Dragon although we are yet to see a long term path being carved there.

We have about 30 members and at least 10 or 15 more hangers on so we usually field two mens teams and one ladies team at most tournaments. In 2017 we sent a 10 year anniversary team to Bangkok which was mostly comprised of former players who got together for one last heist with players travelling from every part of the globe and showing that the spirit of the Viet Celts is always in your blood.

We train every Thursday at the Red River Pitches before going for a Bia Hoi afterwards. Find us through Facebook by searching for ‘The Viet Celts.’