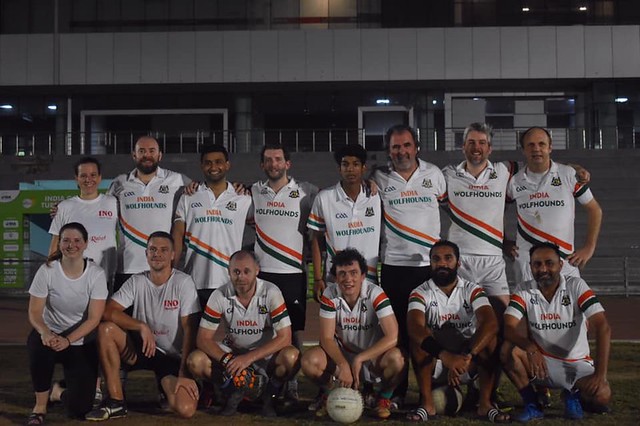 The India Wolfhounds first began as the dream of a few Irish expats during the long, hot Indian summer of 2008. Despite their best intentions the club remained but a name until 2010 when the team first participated in the Asia Gaelic Games. The men’s club was a regular fixture at the AGGs for a few years, but when core members moved away in 2015 the club went into hibernation.

In summer 2018, the Gaelic football team and the club were revived by a hurler from Clare, a hockey player from Dublin, a former footballer from Ballyboden St Enda’s. They were joined soon after by a lady from Cappincur, Co. Offaly and it was this quartet that then set about the business of rejuvenating the club structure. The club soon attracted international talents from across the Indian capital and a team of Gaelic Galacticos was formed of players new to the sport, or in some cases rediscovering it 20 years after they had last kicked a point.

Although the India Wolfhounds are still small in comparison to other Asian clubs, the club is aiming to spread the gospel in the ‘Irish schools’ in India to initiate a younger crop of local players to the game. The team has some regular female players and is hoping to be represented at the Asia Gaelic Games by a Ladies team for the first time. Indeed, the Wolfhounds were delighted to send out its first ever ladies team when the club hosted Qatar GAA for the first ever international Gaelic football match held in India (https://bit.ly/2JWjBzr).

Due to the hot summers and choking winters, our training takes place from August to November and January to April. The club is nomadic in nature and currently rotates training between a patch of grass on the side of a busy road and a baseball park attached to an American social club in south Delhi with one of our primary aims being to secure a permanent base over the course of the coming season.