Cairde Khmer is one of the world’s newest GAA Clubs, only being setup in October 2017.

The club’s members are spread across Cambodia’s two largest cities, Phnom Penh and Siem Reap. Regular trainings take place in both cities, and the two branches combine to form 'Cairde Khmer' to compete in regional tournaments.

Both expats and locals of all ages, sexes, shapes, sizes and standards make up the clubs membership.  Currently the club boasts about 100 members, from ten countries, including Ireland, Cambodia, England, Australia, America, Canada, France, Scotland, South Africa, and Holland.

Cairde Khmer have taken part in the 2017 and 2018 Asian Gaelic Games, aswell as the 2019 South Asian Games.  At the 2018 AGG, the mens hurling team won the Junior trophy, and lost the Junior football final.  At the 2019 SAG, the men’s football team won the Plate, whilst the ladies’ football team lost the Plate final.  At every regional tournament, the club sponsors several Cambodian nationals to travel and play with Cairde Khmer.

Off the pitch, Cairde Khmer members actively partake in community and charity events, such as:

For more information about the club, feel free to check out our FB and Instagram pages. 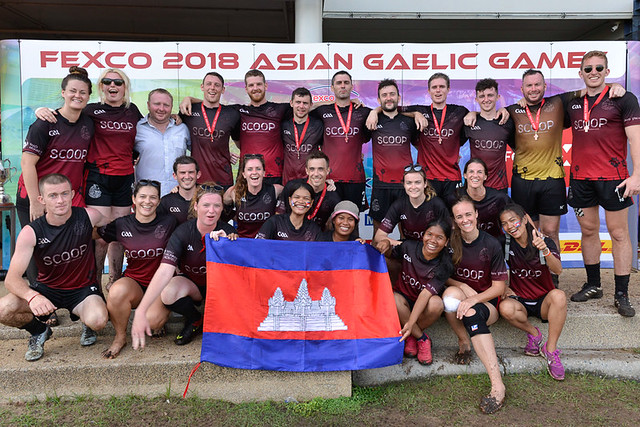